Getting up close & personal with the Kakapo 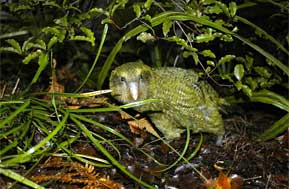 What makes the Kakapo so unique?

The Kakapo is a parrot unlike any other.

One of the most notable features of the Kakapo, is its distinctive, musty odour. And then there's the way it looks and behaves...

Once out in the open, the kakapo will reveal its large size, and the startling mottled moss-green body feathers that provide perfect camouflage in New Zealand's native forest. The softness of the feathers are represented in the second part of the scientific name – Strigops habroptila.

A closer encounter will reveal that thick, musty Kakapo smell. Strong and distinctive , the odour alerts dogs, cats and other predators to the presence of the bird and was a primary cause of the Kakapo's rapid decline.

People are captivated by the un-birdlike behaviour of this critically endangered parrot. Its waddling gait, curiosity, wide range of calls, and comic antics meant that the Kakapo was even occasionally kept as a pet by early settlers.

"The Kakapo is a bird out of time. If you look one in its large, round, greeny-brown face, it has a look of serenely innocent incomprehension that makes you want to hug it and tell it that everything will be all right, though you know that it probably will not be." - Douglas Adams, British author, 1990.